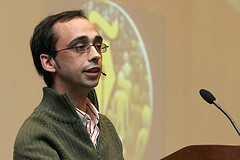 In a newsletter about Social Network Analysis, Stanley Wasserman posted a link to this paper The Facebook: building on pre-existing models and I liked it. After that, some other academics articles came about it, but I were only interested me in the scientific approach.

Later, a year ago, a friend of mine who studies in USA told me about it. I took again and I liked it a lot, but could not find the value in it because I do not knew anyone who were in.

I joined facebook last july 14th. I realized then than a few friends had already joined and I knew it was the right time to see its power and features.

Its well known in the Tech Community, but not too much away from it.

Half of my friends in Tech Business are, and less that 20% in the «real world» 😉

I prefer Facebook to other SN because it has the potentiality of adding new features. I also think that the easy way of adding friends (by my contact list in gmail) helped a lot. The easy way of locating the member of the Tech Community Cluster but looking at the friend’s friends is great as well.

I do not pay attention to the geographical origin of the networks.

4. Do you think that Facebook has an «American» feel to it, or is it universal? Why do you think so many people who don’t speak English use Facebook even though the site isn’t translated into different languages?

It’s more «Internet feel» than «American Feel». The key to that phenomena is that the idea of been connected or related to someone is universal. The english words used are easy to understand and only works as «labels» . The concept and main idea are universal and do not need to be translated: It’s obvious at the first look.

5. Do you think there is room for a Facebook competitor in your country? Could someone from your country create a more interesting social network for you and your friends?

Yes, of course. The percentage of people in Facebook is very low, the market is unexplored. Anyone who gets to the young people first, will get the snowball effect.